Dusty little Tucumcari is probably one of my favorite stops on Route 66. Home of the famous “Tucumcari Tonight” slogan, I always associate the town with classic American motels. People actually drive across the country to get a glimpse of Tucumcari’s famous neon. When I arrived in town, I unpacked the bike and went on a twilight neon tour around town, which was nothing short of magical. 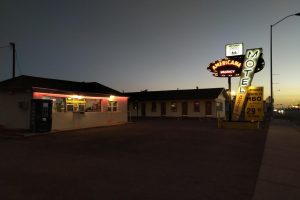 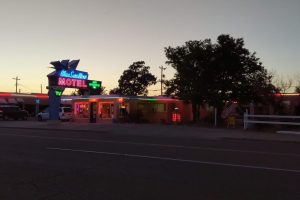 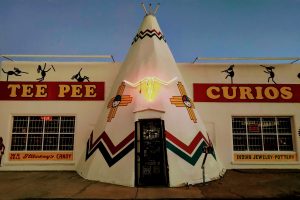 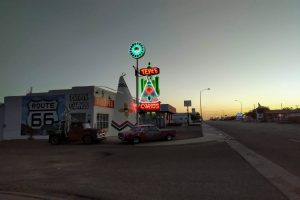 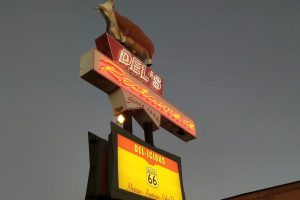 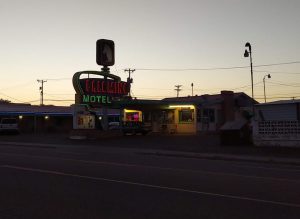 I’ve had the pleasure of staying in the Blue Swallow Motel before, and it was nice saying “hi” to the owners again. There’s Del’s Restaurant, Tee Pee Curios (one of the best souvenir shops on the Route), the Palomino Motel, the Americana Motel (which I have also stayed at), and the Motel Safari, which looks like we stepped onto the set of a Wes Anderson movie. There’s a bit more neon in Tucumcari, but you get the idea. Perhaps we should get to the radio station.

The next morning after the respective AM and FM morning shows were concluded on KTNM and KQAY, I pulled up in front of the station and met Karen Alarcon, who was checking the mail at the time. She hosts the morning show on KQAY-FM and was more than happy to give me a tour. The first thing you notice about the station is the two large murals which take up two sides of the building. Out back is the AM tower with a 4-bay FM antenna mounted up top. 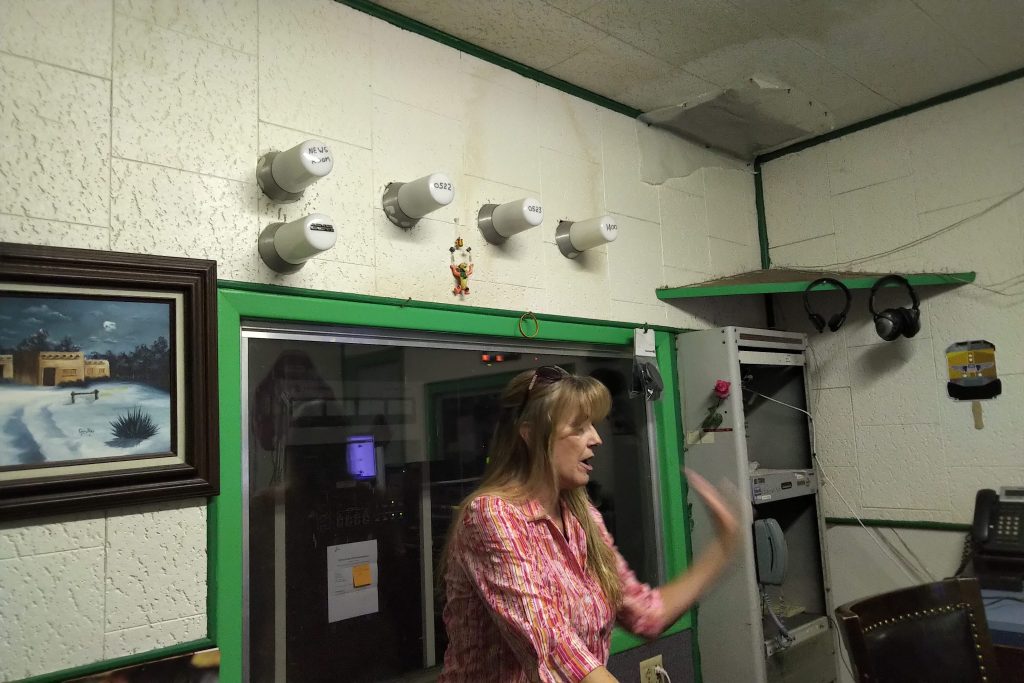 Karen Alarcon, FM morning host, is caught mid-sentence describing the features of the AM control room. I noticed the phone lights above the window to the transmitter room right away.

We went from the lobby, past the sports office toward the AM control room. Karen says there are only three employees on site these days. The Quay county extension director arrived shortly after me to record some production, so he joined in on this ad hoc tour. While this is not the original station building, KTNM-AM has been on the air since 1941 according to FCC records. Despite their RFI issues, I personally love co-located sites, especially those with the transmitter room adjacent to the studio like this one. Back in the day, you could see the tubes glowing with modulation peaks. That’s radio! 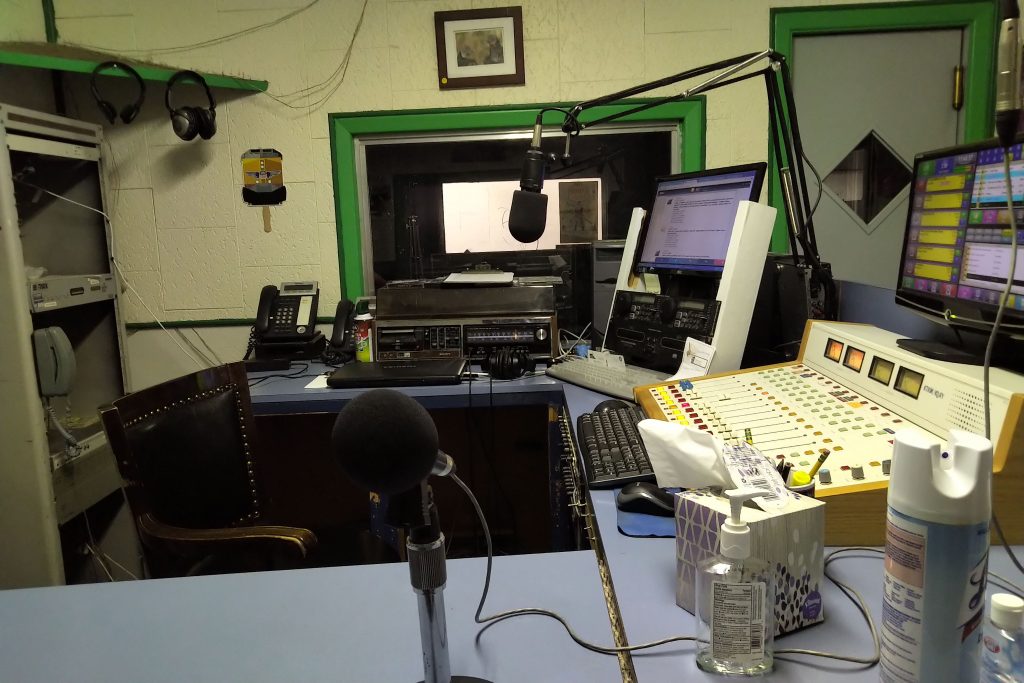 KTNM-AM control room. The transmitter room is to the left in this picture. The FM control room is behind the window in the center.

The AM morning host had already left for the day, so we wandered toward the FM control room where Karen spends her mornings. 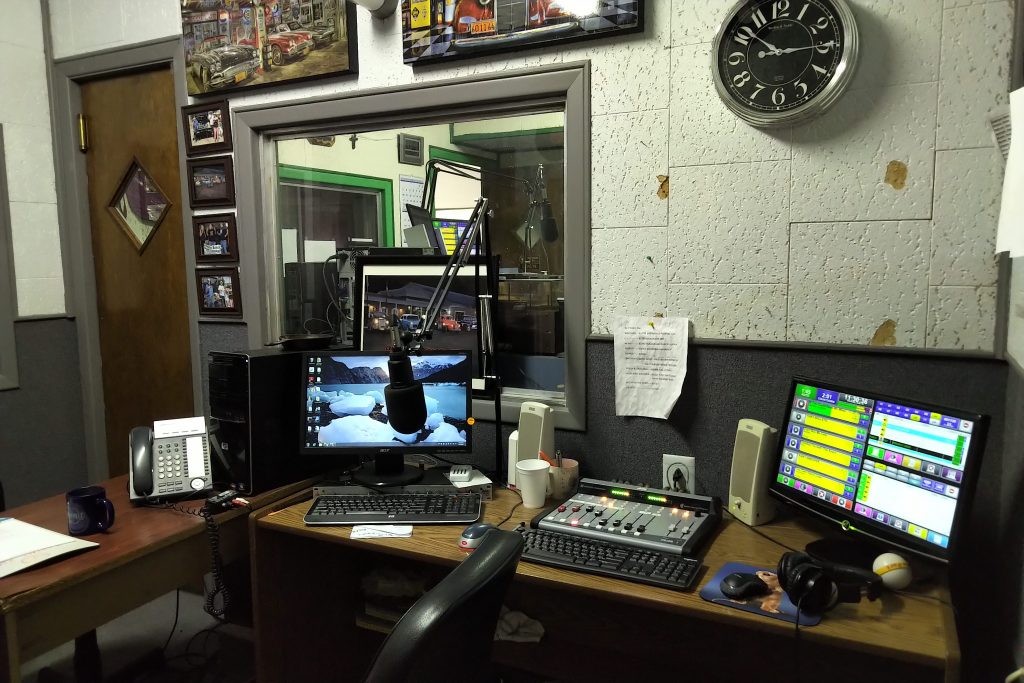 My senses tell me the KQAY control room probably used to be the newsroom (remember that light that said news room?), judging from its size and proximity between the AM control room and current production room, which we’ll see next. 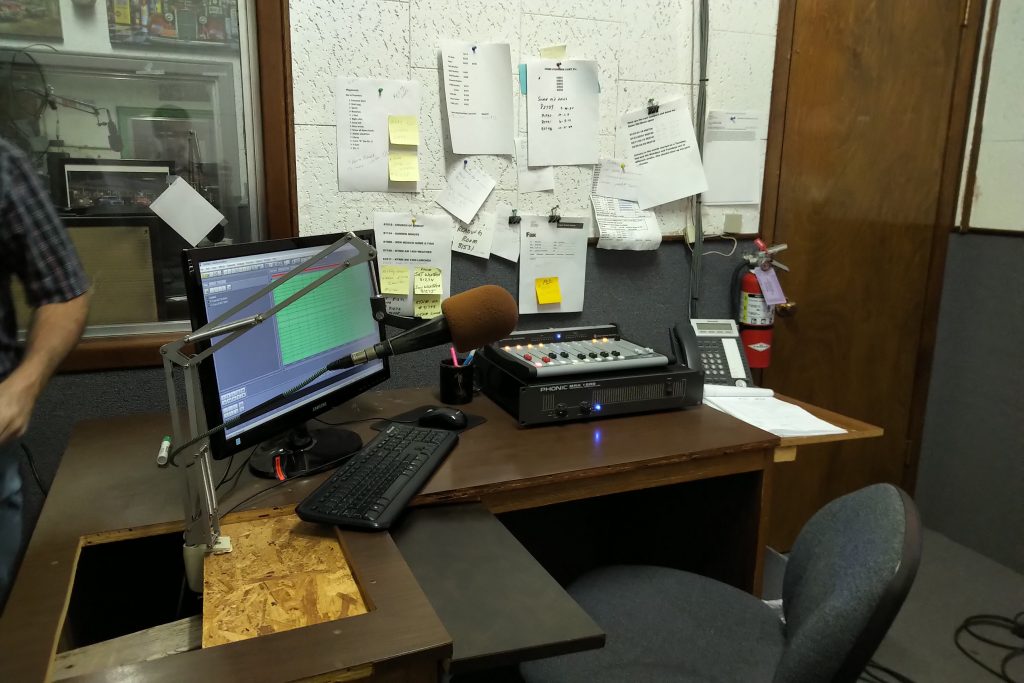 Karen got the recording set up for her guest’s weekly feature once we got into the production room. I like these old studio layouts, because they often have multiple sets of doors, so you can sneak around between studios without going into the main hallway. Always a good feature if you’re trying to hide from management. Speaking of which, Karen says they’re not in the building anymore, and haven’t been for years. The owners are apparently based in Roswell, New Mexico. As we head back to the lobby, Karen points out a bit of station history on the wall. The picture below also appears on the mural on the side of the building. 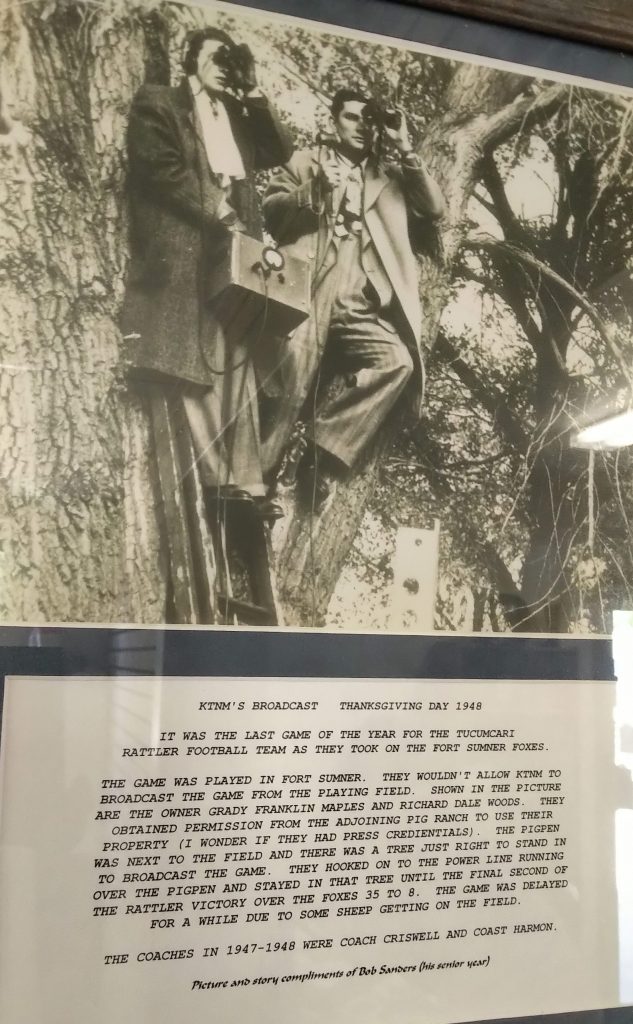 There’s a remote for ya!

KTNM has a long history of remote broadcasting. Before I stopped by the station, I toured the Tucumcari Historical Museum, where I discovered another piece of local radio history. 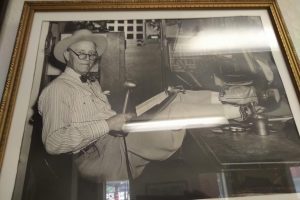 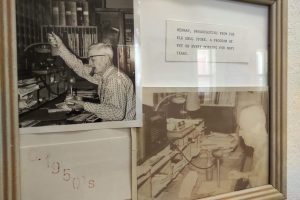 It appears that Herman Moncus owned the Elk Drug store in Tucumcari, and judging from the pictures, broadcast regularly from the store. Quay County Sun records indicate Moncus was active in the community and played a large part in founding the museum. I ran this by Karen who had heard of someone broadcasting from the drug store, but didn’t know much else.

We wrapped up our tour and Karen was quick to give me an area map, pointing out any other attractions I may want to visit.

I had a wonderful time in Tucumcari, thank “Karen A” as she’s known on air for her time, and can’t wait for a return trip to a classic town brimming with Americana from days gone by.